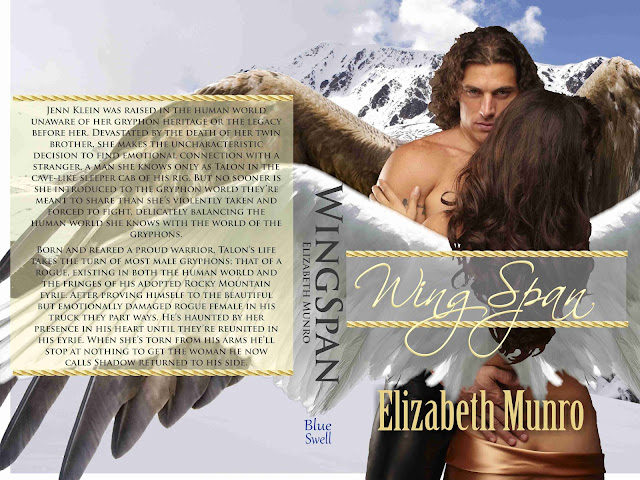 ...if you haven't read parts one and two yet, please read them first. This is the final installment of the Wingspan preview!

Mark Williams watches the unusual female pull away up the hill. Between gear changes he puts the window up halfway and pushes his hair behind his ears before getting his sunglasses back on. It’s early enough the morning sun shines straight in glaring off the dash and warming his skin.
That she’s interested in him he doesn’t doubt. Her nervousness is obvious and he suspects her age is partly to blame.
Yeah, but you’re still a kid, he laughs at himself. Not even a hundred.
The fact that she’s on her own could also explain her caution. Females rarely travel alone away from their eyrie and though she returned his advances he suspects she’s in a hurry to catch up to her father or brother; the only males who should be with her.
A nervous glance at the empty sky reassures Mark that a rough encounter with them isn’t in his very near future at least. With his training he’s sure he could beat them both to pieces but honour requires he take his licks if they don’t like him. As he pushes the heavily laden rig through another gear he realizes she’s been away from her eyrie for a while if she’s learned to ride a motorcycle.
It could be she’s a true rogue, abandoning the eyrie for the human world like he had years before. Many find satisfaction in service to the Sire and Dame, the hereditary royalty, but not Mark. As Talon, the gryphon male in his spirit, he’d trained for decades to be ranger. A proud place in the elite royal guard was the only service he felt worthy of him but seeing bigger less talented males be selected time and time again put him off.
Instead he indulged in a female who appreciated him and his fighter spirit. A larger western gryphon herself she was nearly his height but she was flighty and prone to wandering for months at a time with his own sister who preferred the wind under her wings to the stone Jasper cavern they’d all come to call home. Not that he minded. He’d done the same.
Talon had managed to abandon courtship as well, never offering Swift his bite though there seemed no shortage to the tears she would offer, shedding them his way every time things seemed serious. Commitment issues Swift had accused but in his heart he needed someone who saw him as more than an intimidating male to show off to her friends or escort her through some human shopping mall while she picked out something shiny for herself.
But this little female is different. A demanding vulnerability in her scent commands him to win her; a line he’d never even wanted to cross with another. Her size could be driving him to be protective. Gryphons from this side of the continent are decidedly larger than those further east where he was reared but she’s truly tiny, her scent so exotic he can’t begin to guess where she’s from.
He never thought he’d find vulnerability sexy but in his little female it’s searing hot. Maybe he’ll find her motorcycle ahead, her scent and clothing leading him through the forest as he undresses and takes wing, becoming Talon and knowing she’s high above stalking him already. Their magic protecting them from human eyes as he finds a clearing and enough space to spread his wings and take off.
Talon’s strength and size would overpower her and he’d revel in her submission before letting her go anticipating his own terror as her speed and agility let her get her claws to his exposed throat…
He hasn’t hunted like that with a female in years. The chance she’ll show up is slim; that she’ll stay interested in him long enough to hunt are even slimmer. In spite of the weak prospects he’s excited with the possibility.
You’re in way over your head with this one, Talon, his human voice tries to warn the unfamiliar gryphon need for a mate. One shot. You screw this up you won’t get another chance with her.
As he enters her scent grows strong and he leans toward the window, inhaling deeply. Mark groans with need, sweeter than when they first spoke. Light brown eyes, he recalls, and her long hair tied back. As he remembers the shape of her ass straddling the seat her scent disappears and he casts his eyes wildly about for any hint of her.
“Damn it,” he mutters nearly tearing the wheel free in frustration.