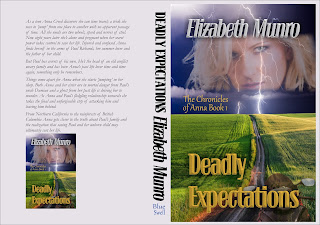 Deadly Expectations has a new cover and a new blurb!

As a teen Anna Creed discovers she can time travel; a trick she uses to ‘jump’ from one place to another with no apparent passage of time. All she needs are two wheels, speed and nerves of steel. Now eight years later she’s alone and pregnant when her secret power takes control to save her life. Injured and confused Anna finds herself in the arms of Paul Richards, her summer lover and the father of her child.But Paul has secrets of his own. He’s the head of an old conflict weary family and has been Anna’s past life lover time and time again, something only he remembers.Things come apart for Anna when she starts ‘jumping’ in her sleep. Both Anna and her sister are in mortal danger from Paul’s uncle Damian and a ghost from her past life is driving her to murder. As Anna and Paul’s fledgling relationship unravels she takes the final and unforgivable step of attacking him and leaving him behind.From Northern California to the rainforests of British Columbia Anna gets closer to the truth about Paul’s family and the realization that saving Paul and her unborn child may ultimately cost her life.

I've always wanted to include a motorcycle on the cover since it's a big part of the way Anna gets around!

Wingspan, Taken on the Wing #1 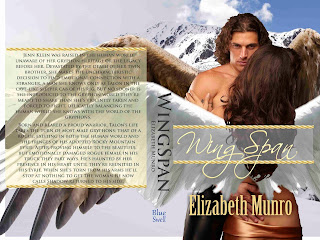 With Wingspan's release this spring I will be blogging the first few sample chapters.

Jenn Klein was raised in the human world unaware of her gryphon heritage or the legacy before her. Devastated by the death of her twin brother, she makes the uncharacteristic decision to find emotional connection with a stranger, a man she knows only as Talon in the cave-like sleeper cab of his rig. But no sooner is she introduced to the gryphon world they’re meant to share than she’s violently taken and forced to fight, delicately balancing the human world she knows with the world of the gryphons.

Born and reared a proud warrior, Talon’s life takes the turn of most male gryphons; that of a rogue, existing in both the human world and on the fringes of his adopted Rocky Mountain eyrie. After proving himself to the beautiful but emotionally damaged rogue female in his truck they part ways. He’s haunted by her presence in his heart until they’re reunited in his eyrie. When she’s torn from his arms he’ll stop at nothing to have the woman he now calls Shadow returned to his side.