Rye, the hero of Elizabeth’s Constant, is a Core Alliance soldier. He’s fought battles on numerous planets, risking his life. Rage, the hero of my most recent cyborg story, Releasing Rage, is also a warrior. He was manufactured to fight aliens and other human enemies.

What is it about warrior heroes that appeal to us?

First and foremost, there’s something extremely sexy about a male who feels so passionately about a cause or person or planet that he is willing to die for it. Rage risks his life to fulfill his missions. Can you imagine what he’d be willing to do for the woman he loves?

Soldiers also have a sense of loyalty. Rage is designed to be the perfect soldier. It takes extreme measures for him to finally rebel against his creators. Once he gives his loyalty to another being, he’s true. He won’t ever betray the woman he loves.

Soldiers are normally not solitary. They play well with others. Rage fights alongside his cyborg brethren. His loyalty extends to them. He has that ‘leave no soldier behind’ philosophy. When he rebels against his creators, he plans to free all of the cyborgs around him.

This sense of brotherhood gives us a glimpse of how Rage will act when he becomes a father. There’s a younger cyborg, Gap, whom Rage mentors, guides and protects. I can envision him doing the same with his own offspring.

Soldiers are survivors. They’ve seen the worst of beings, of situations, and survived. These warriors have faced emergencies and not lost their cool. During a disaster, like a zombie apocalypse (grins), they’re the beings any woman would want by her side. We can depend on them to, when the going gets tough, persevere.

There are downsides to loving a soldier, of course. There are downsides with every profession. Soldiers in SciFi romance are often conflicted between their duty to their cause and their duty to the women they love. They have high risk jobs and could die, leaving their heroines forever. They often have enemies. Every scene, every mission could be their last. This adds a delicious tension to every SciFi romance set in wartime.

What do you love about warrior heroes? 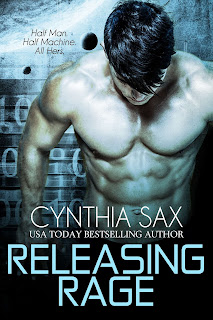 Blurb
Releasing Rage
Half Man. Half Machine. All Hers.

Rage, the Humanoid Alliance's most primitive cyborg, has two goals--kill all of the humans on his battle station and escape to the Homeland. The warrior has seen the darkness in others and in himself. He believes that's all he's been programmed to experience.

Until he meets Joan.

Joan, the battle station's first female engineer, has one goal--survive long enough to help the big sexy cyborg plotting to kill her. Rage might not trust her but he wants her. She sees the passion in his eyes, the caring in his battle-worn hands, the gruff emotion in his voice.

When Joan survives the unthinkable, Rage's priorities are tested. Is there enough room in this cyborg's heart for both love and revenge?
Buy Now: